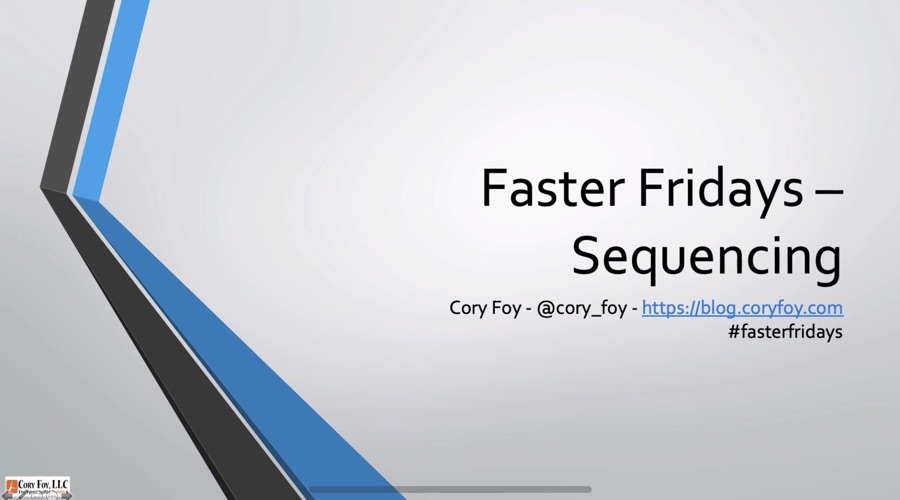 Happy Friday! This week I started a new series around Mapping and Strategy and I’m excited to announce the start of a second series I’m calling #fasterfridays. FASTER is an acronym for a method I developed to help organizations deliver faster (it stands for: Form, Align, Sequence, Test, Execute, Realize). The heart of it is a combination of Lean and Agile techniques, and this series is designed to share short videos around these topics you can use in your teams and organizations.

This week’s video covers how you can approach challenging prioritization or ranking sessions by thinking about the terminology just a little differently. You can watch the video below, and I’ve also included a complete transcript at the bottom. If you’re interested in finding out how to apply this to your organization, don’t hesitate to reach out via Twitter or email hello at coryfoy dot com. Have a great weekend!

Happy Friday! Welcome to a new edition of FASTER Fridays. In today’s video, I wanted to share a little terminology trick I use to help teams and organizations figure out the order they should do work in. Let’s bring up a little backlog. It looks good! We have post it notes, and things on them. But one problem – what order should we do them in? Does it matter?

Typically we’d call the notion of ordering things “prioritization”. Which is good! We should understand from a relative perspective how important work is. But I’ve been a part of more than one prioritization session where multiple items end up with a priority of “1” – or whatever we’re using to indicate the top most thing. For example, preventing fines is a pretty critical initiative, but so is being able to close more sales.

To sidestep this, I separate out the notion of prioritization from sequencing. In other words, we absolutely should know how important the work is, but we also need to know what thing we should tackle first. And that might not always be the top most item.

So next time you are struggling with a prioritization session, let the duplication happen, and then talk about sequencing. You might find it changes the conversation into something much more productive!

If you’ve enjoyed this, feel free to check out all the Faster Friday videos on my blog, or reach out on Twitter at Cory underscore Foy or via email at hello at coryfoy dot com. And be sure to come back on Friday for another Faster Friday!