..but if the Scrum Alliance Can’t Do It, Who Will?

Jesse Fewell has written a blog post called Scrum Is Dead. Long Live Scrum. His viewpoint is that the old Scrum is dead, and that it is morphing into something new. In the comments, Jesse asked the following question in response to my call for the Scrum Alliance to focus on the Software Community:

Here’s my question though, if the SA isn’t going to be the one to apply agile thinking to lawyers, financial analysts, music producers, and managers, then who will? Are tech workers the only knowledge workers worthy of agile thinking?

(If you don’t want all of the background, skip to Cory Gets to the Point)

It’s a good question. Let’s start with why the Scrum Alliance exists. On their web site it says:

The Scrum Alliance is a nonprofit organization committed to delivering articles, resources, courses, and events that will help Scrum users be successful.

Scrum Alliance’s mission is to promote increased awareness and understanding of Scrum, provide resources to individuals and organizations using Scrum, and support the iterative improvement of the software development professions

(Emphasis mine). Further, in section 4a it says:

(Again, emphasis mine). And while the board members aren’t compensated, the managing director made, in 2008, $240,000 USD. In fact, all told, the Scrum Alliance paid out three quarters of a million dollars in “independent contracting” fees.

Not bad for managing a 3-person staff of independent contractors. Full disclosure – I worked as an independent contractor for 6 months for the Scrum Alliance. I imagine my compensation should be available in the 2009 filing form. But, let’s just say, it was pennies compared to the above numbers.

Ok, so now that we see that the Scrum Alliance states their purpose is furthering software development, let’s look at the break down of staff:

And the heart of Jesse’s question becomes, what is the most effective use of a team like that?

Which seems to be the right lineup for what Scrum is (3 roles – ScrumMaster, Product Owner, and “Other”). So, in fact, if one was going to set out to “Transform the World of Work”, then keeping the offerings and programs industry agnostic seems like a good thing. Except for one thing.

Magic. Magic is the little dots in the Scrum diagram which shows what actually happens in those 2-4 weeks sprints, and those 24-hour increments. In software terms, Scrum is an abstract class, which doesn’t implement Do24Hours() and DoIteration(). You have to do that. Anyone implementing Scrum has to do that. It’s that magic which distinguishes the successful teams from the non-successful ones. It’s where Lean and Kanban and XP and all sorts of other things get put in. Or, in other industries, where the real work happens.

For example, if I’m a Lawyer, that 24-hour period, or that iteration, I’m going to be going to court, preparing cases, visiting my clients, bribing judges, etc, etc. Or if I’m a movie producer, I’m going to be coordinating shoots, editing previously filmed clips, pampering the actors and actresses, etc.

(Also known as Cory Gets to the Point)

In fact, in a quote as famous as the Bill Gates “Nobody needs more than 640k” quote, Ken Schwaber says:

I estimate that 75% of those organizations using Scrum will not succeed in getting the benefits that they hope for from it.

Proof is in the pudding. If Scrum isn’t executed successfully, it doesn’t work. Which means that if we want Scrum to succeed, then we need to be helping those teams figure out what happens in the “magic” areas of the Scrum process.

So far, so good. Jesse’s question still stands – why not help everyone find the magic quadrant?

Because we can’t. The one thing any coach will tell you is that every engagement is different. Some political game. Some quirk about the product. Some jursidictional rule. Some working hour filming requirement in Pago Pago. But, if the Scrum Alliance wants to help, there are at least two options: 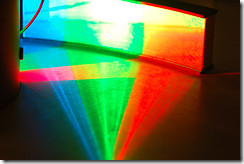 Here’s how I look at it. You have a board and directorship of software industry leaders. You have thousands of people in the software industry using Scrum. You have people begging for better ways to do software. And you have your founder saying that 75% of teams aren’t getting the benefit. You want to look at all that and say, “Let’s branch out?”

Look over to your right. That’s a laser going through a prism. Alright, that’s what happens when a laser goes through a prism. It gets split into lots of shiny objects. That are so very pretty to look at. And hear about. Now watch this video:

The Scrum Alliance can be a shiny object, pretty to look at, fun to talk about, neat for a demo or two. Or it can be a focused cost and quality-overrun killing machine by helping the software industry find out what is in those magic circles which is causing 3/4s of the users to not get the benefit. Or, to put it in real numbers, find out why of the members who paid collectively a tad over $2.6 million in 2008, three-quarters (or around $2 million dollars worth of fees) aren’t getting the benefit they should be getting.

So, Jesse, that’s why. The Scrum Alliance can’t hold the keys and want to open the doors at the same time. Either fix what is broken, or split off an industry specific group which has control over the certifications for that industry and can fix it for them.

Personally, I’d prefer to see the certifications dropped and the Scrum Alliance focus on fixing the industry-wide pandemic we call software development. But that’s just me.

Edit: William Pietri points out that lasers are monochomatic, and so when shot through prisms, they split into multiple beams as shown here. It’s still shiny objects with less power than the original – just better represented. Thanks William!