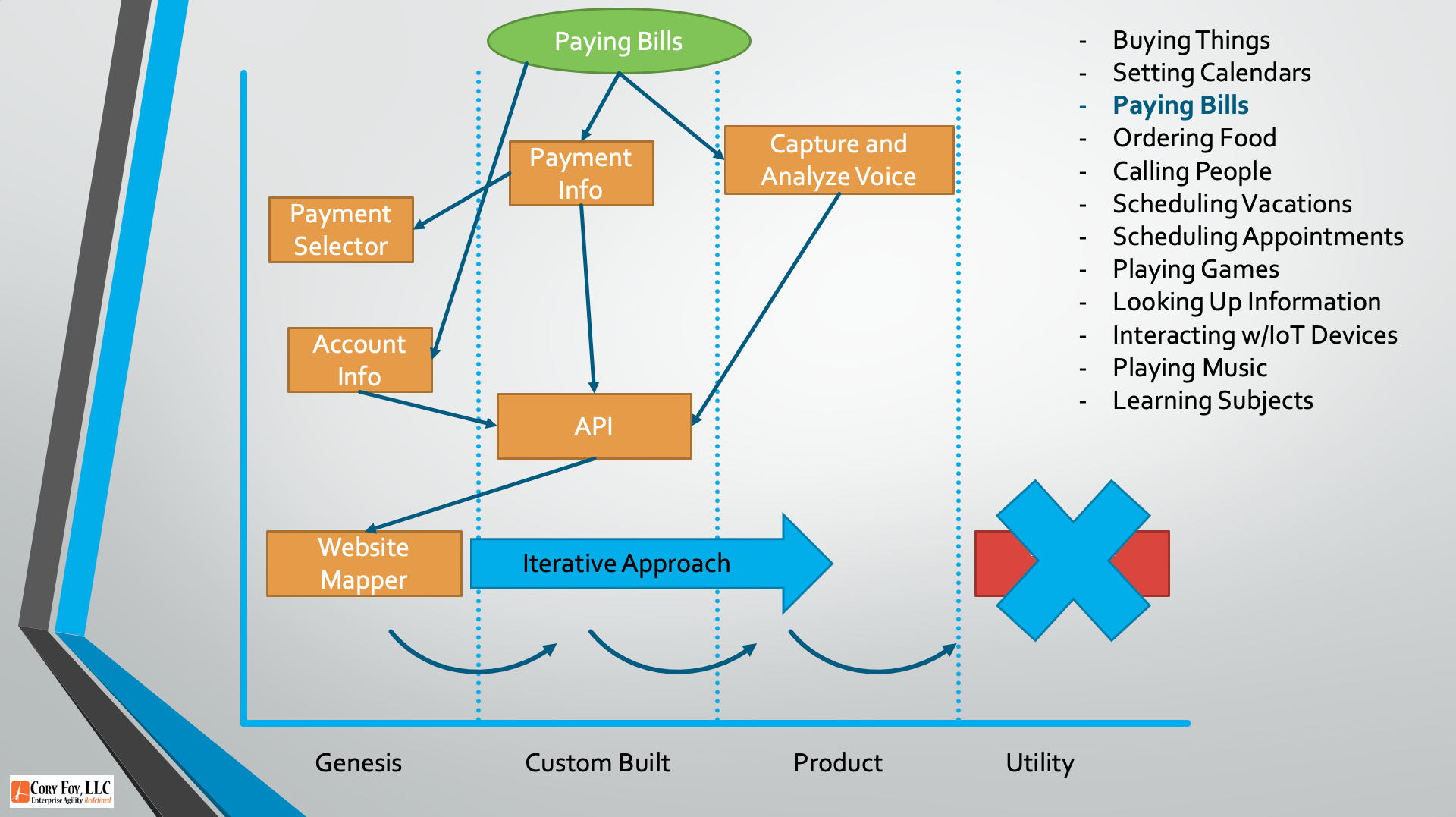 Happy Mapping Monday! Today’s #mappingmondays video is a joy to hear – because we look at how you can make a gameplay with Voice First! If youâ€™re interested in finding out how to apply this to your organization, donâ€™t hesitate to reach out via Twitter or email hello at coryfoy dot com!

Transcript:
Happy Monday, and welcome to another Mapping Mondays video! Wouldnâ€™t it be amazing if instead of just listening to me here and asking questions on Twitter you could just ask a question during the video and I could respond? Or you could make comments about things as you watched and get a summary of points about the video you responded to at the end?

This level of interactivity is part of the goal of the Voice First movement. People like Brian Roemmele are at the forefront pushing the boundaries of what is possible with devices like Alexa, Siri and more. Itâ€™s easy for us to sit back and take in the fruits of this work, but what if we wanted to join in. Could we understand what Voice First could impact, and what gameplays we could make in it?

First, we need to start off by defining what we mean by Voice First. Letâ€™s start with a simple user need of â€œinteracting with things using our voiceâ€ and look at the resulting value chain. The state of the technology right now is that we can custom build apps which can be leveraged as part of products such as Alexa and Siri. This is good, because it means the landscape is such that we can start building things on top of the ecosystem, rather than trying to build the ecosystem itself.

Next, what about evolution? Weâ€™re probably going to have the most rapid success where we can take small leaps. Typically the smallest leap is when something has an API already and weâ€™re changing the entry and interaction methods. Much harder are those things which donâ€™t have an API or entry methods, so weâ€™ll try to stay away from those for now.

Now on to our real starting point – user needs. What things do people do every day that also interacts with an API? Letâ€™s look at some user needs which are done online:

Buying Things, Setting Calendars, Paying Bills, Ordering Food, Calling People, Scheduling that long needed Vacation or some appointments we need to take, Playing some Games, Looking Up Information (use that all the time!), Interacting with our IoT devices like Lights or our music . Speaking of music – Playing Music and Learning Subjects.

We have many possibilities of interactions that could be transformed with Voice First. If we map out the value chains for these, we start to see some commonalities. Some of these are one-off events – Setting a calendar entry or changing lights. We probably donâ€™t have much of a gameplay there because creating a fire-and-forget voice call to an API is pretty commoditized. But others require interaction. Some of that interaction is human-based, which is going to be highly genesis if itâ€™s even possible. But others have interactions which can be automated.

As an example, paying bills is something which requires multiple steps between several systems. Payment information is needed, and sometimes it may come out of different accounts. We also have to set up the bill itself to be paid, so the billâ€™s account information will need to be stored and automated. Finally, the specific way we pay the bill is going to differ from site to site.

To succeed, we ultimately want a commoditized interface capable of interacting with disparate systems underneath it. We want people to be able to say â€œSiri, pay my car loanâ€ and â€œSiri, pay my electric billâ€ without having to navigate the complexities and specifics of each type of bill. We built a system like this for scheduling inspections back in 2004 which allowed users to interact with a single form and schedule inspections across multiple jurisdictions with wildly different websites.

Now, from a doctrine perspective, we donâ€™t want to necessarily start with a commoditized interface. We want to build iteratively towards this commoditization, recognizing that our strategic advantage will be a system that can map other systems into our schema.

Note that, other than layering the voice-response as a market mover, this is pretty traditional strategy. Weâ€™re looking for openings of painful things from our users and moving to make that pain go away. But the evolution of voice-first commoditization as a product means that we also have a first mover advantage with a market differentiator and can leverage parts of the ecosystem such as trusted payment stores.

Finally, if weâ€™ve done a good job separating concerns in our systems, using voice instead of text entries becomes much easier since weâ€™re treating it as a secondary input mechanism. The primary advantage weâ€™re getting is being first to market with a unique offering – but if we donâ€™t have a good product solving needs underneath it, then once others join in the fray weâ€™re going to have a tough time defending our position.

Hope youâ€™ve enjoyed this video! If youâ€™re interested in learning more about applying mapping and strategy within your organization feel free to reach out on Twitter at @cory_foy or via email at hello at coryfoy dot com. And be sure to check out all of the Mapping Monday blog posts on my site. Have a wonderful week!