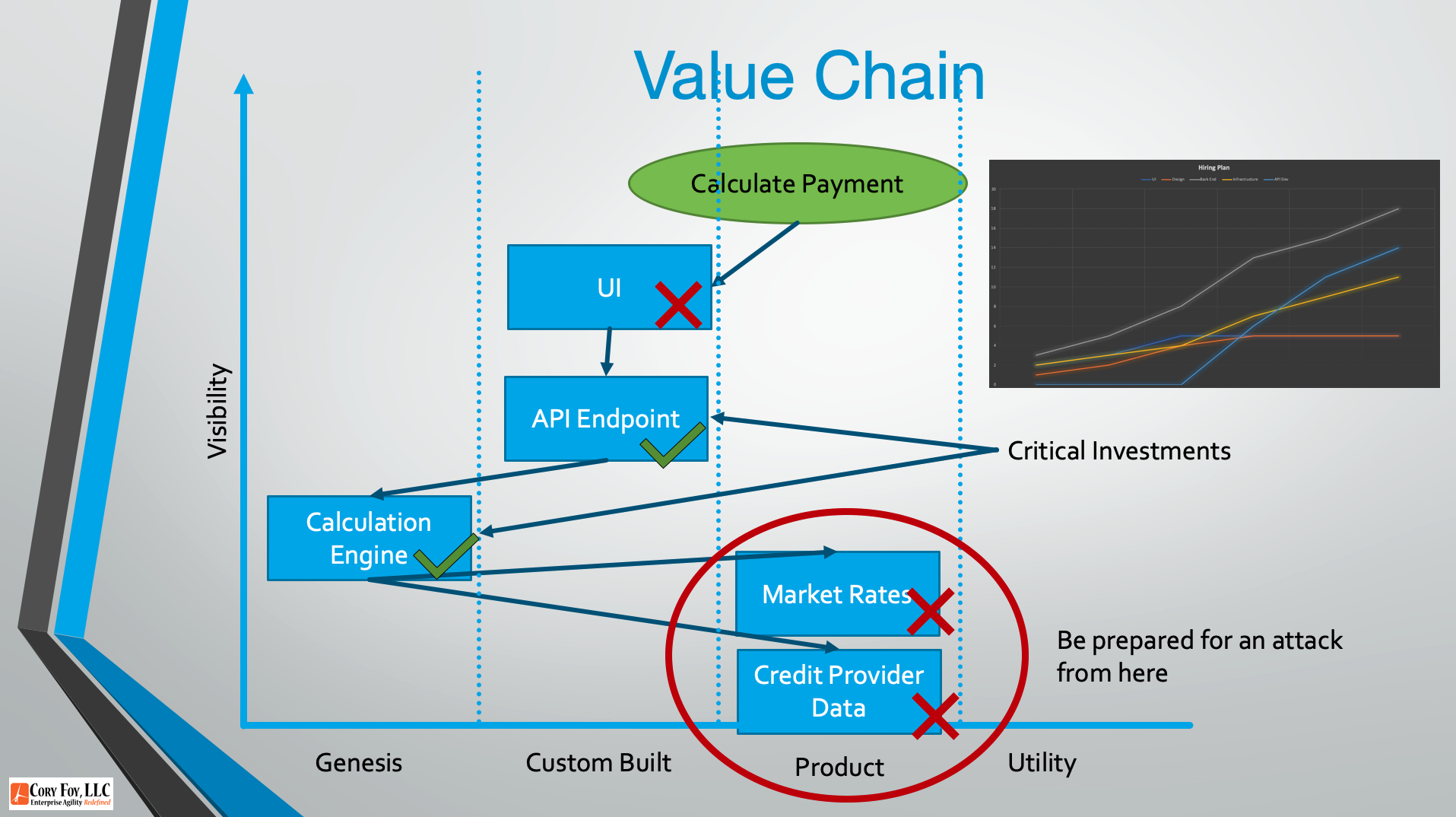 Happy Mapping Monday! Today’s #mappingmondays video covers how to use maps to help figure out where to grow your teams and their skillsets. As always, a full transcript is included below the video. And If youâ€™re interested in finding out how to apply this to your organization, donâ€™t hesitate to reach out via Twitter or email hello at coryfoy dot com!

Happy Monday! Welcome to this weekâ€™s Mapping Monday. Iâ€™m Cory Foy, and in todayâ€™s video I want to show how we can think about the investments we need in our organization based on the market direction and component evolution.

Letâ€™s take a look at a company that is building a financial calculator for the market. They want it to be used by all kinds of people. Theyâ€™ve bet that theyâ€™ll bring in their expertise and be able to build out custom products for a wide variety of industries. To get there, theyâ€™ve invested in growing significant teams of UI developers, designers, back end developers, and infrastructure teams. But theyâ€™ve run into some headwinds – people donâ€™t seem to be buying the product as much as they expected, and when they do it seems like they want heavy integration more than a turnkey solution. Is this trouble for the company?

Well, letâ€™s step back and look at the value chain. Weâ€™ll say that one of the user needs is calculating a payment based on real-time rates and credit scores. For this Iâ€™m going to rely on the y-axis of visibility. At the top, we need a UI for entering the key aspects and displaying the results. That in turn requires an API endpoint we can send and retrieve data from. That endpoint relies on integration with a special calculation engine, which itself relies on data from credit providers and market rates.

Now, letâ€™s map this landscape. We can see that the UI is custom-built, as is the API. The engine itself is in Genesis, but the data it relies on are all products. We have teams working on just about every step in this chain, but where are the plays at?

Letâ€™s look at the components for evolution going right to left. The data providers will likely end up utilized, but weâ€™re not in a position to make the play to move those components as we donâ€™t have access to the components they rely on.

Next letâ€™s look at the UI. Thereâ€™s obviously a lot of open space in front of it, but does it have potential to be commoditized? In other words, does making this UI into a product or utility independent of our other components make sense? Do any of our gameplays seem like theyâ€™ll be useful? We can do some market research, but given that most of the time the UI is simplified, it is unlikely we should be making a big investment there.

Lastly is the calculation engine. This is something we want to evolve, and likely productize primarily so we can think about operationalizing it – scaling, monitoring, etc.

So if we look at our map, it would suggest that we continue contracting for the data for our engine. We should also deprioritize our UI work, instead favoring a sales process which looks for integrating our API into other providerâ€™s products. In addition, we should be working to operationalize our calculation engine, so we need to make sure we have the right skillsets to help that play along.

Whether this set of plays helps save the company from the headwinds depends mightily on how rapidly they recognize and shift, how capable they are of making the plays, and whether the product is compelling enough for someone to integrate instead of just build themselves. Thereâ€™s also the danger that since they are relying on downstream data, those providers could do their own ILC play and offer this service.

But weâ€™re certainly in a much better knowledge position of what the potential in the market is, where we could make plays, and what kind of personnel we need to make those plays.

Hope youâ€™ve enjoyed this video! If youâ€™re interested in learning more about applying mapping and strategy within your organization feel free to reach out on Twitter at @cory_foy or via email at hello at coryfoy dot com. And be sure to check out all of the Mapping Monday blogs posts on my site. Have a great week!