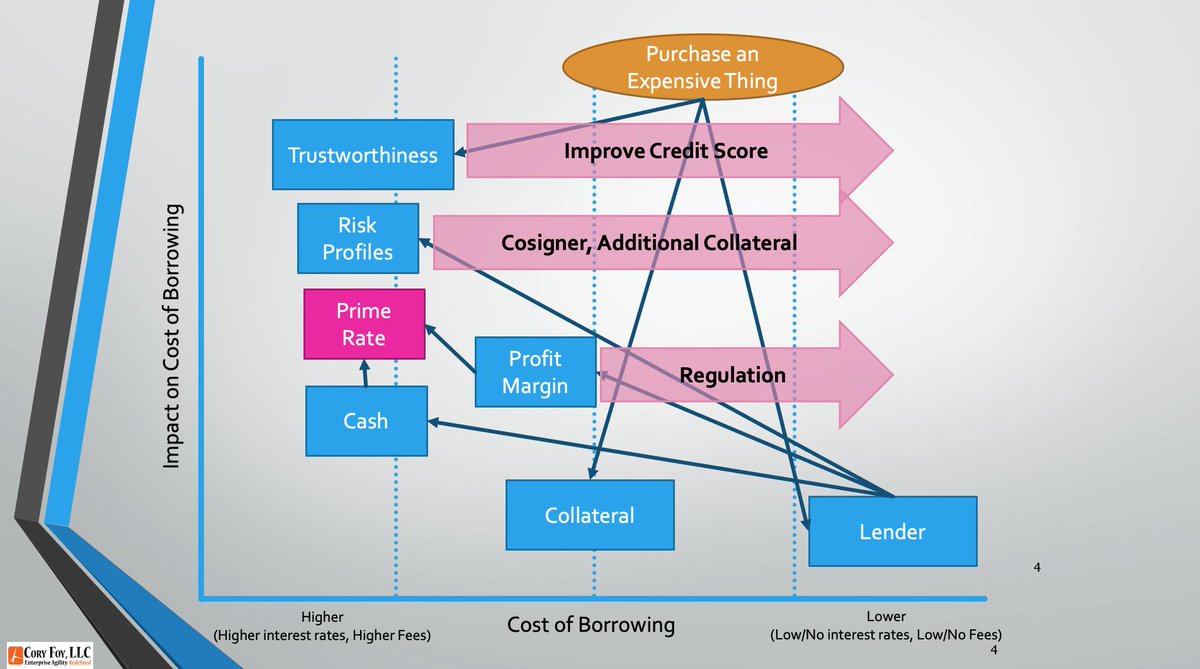 Happy Mapping Monday! Today’s #mappingmondays video covers negative gameplays and how you can search your maps and gameplays for exploitable weaknesses before your competitors do. As always, a full transcript is included below the video. And If youâ€™re interested in finding out how to apply this to your organization, donâ€™t hesitate to reach out via Twitter or email hello at coryfoy dot com!

Happy Monday! This is Cory Foy, and in todayâ€™s Mapping Monday I want to talk a little about negative gameplays and how we could anticipate them through maps. Iâ€™m going to use a very real example for many of us – money – and how it can be impacted.

For our map, letâ€™s start with a user need of purchasing something that costs more than the cash we have available to us. We have a couple of things in our chain – collateral (usually the thing itself, like a property), Trustworthiness (generally a credit score) and a Lender. In turn, the Lender will need access to Cash, Profit Margin, and Risk Profiles. One of the influencers of Cash and Profit Margin – here in the US at least – is an interest rate influenced by the Federal Reserve known as the Prime Rate. For many types of credit transactions, the rates are tied to the rate set by the Federal Reserve – and therefore move with it.

If we want to show how we can take action, we can map this with some different types of axes. Ultimately the thing we want to influence is getting a better – in this case, lower – rate for the money we have to borrow. After all, if we can borrow money without any interest rate at all, then we have a lot more flexibility.

Now, if we want to reduce our cost of borrowing, we can make some positive gameplays. For example, we can improve our credit score to improve our trustworthiness (ignoring the outright problems for people and credit scores for this video). We can also improve our risk profiles – bringing on an additional cosigner, or bringing additional collateral.

Now, generally as an individual we have little control over the other factors – we donâ€™t control Profit Margin, nor do we control the Prime Rate. But what if we could? I mentioned earlier that Profit Margin doesnâ€™t have as big of an impact because of regulation, and there are definitely moves to reduce those margins from a regulatory perspective to reduce the cost of borrowing.

But letâ€™s say we canâ€™t control regulations, and weâ€™ve moved all of the other needles as much as we can. What about that Prime Rate? Is there a game play we could get to move it? To find out, we need to figure out what itâ€™s made of.

The Prime Rate is actually a set of other rates. The WSJ Prime Rate and the 11th District Cost of Funds are both rates set by surveying banks to see what they are charging. Impacting those requires a coordinated effort to change those financial institutions. The Federal Discount Rate and the Fed Funds Rate, however, are both under the influence of the Federal Reserve. They set the cost of borrowing money – either from each other, or from the Federal Bank directly.

This means if weâ€™ve tried our other options, we really want that lower rate, and we have the power, we can run a negative gameplay against the economy itself. By driving uncertainty and fear into the economy, the Federal Reserve may act by lowering the key rate targets to encourage the economy to come back up. There are lots of ways to inject fear into an economy – from falsified Press Release plays to hacking of key systems to Trade Wars, but all can end up with the same impact if sustained long enough.

Obviously this is a hugely unlikely scenario, but highlights a way that you can look at your systems to find exploitable weaknesses in your plays before your competitors do. After all, they may not be as likely to just play on a â€œDifferentiationâ€ gameplay – especially if they are desperate or unscrupulous.

Hope this has helped show the importance of looking for weaknesses in your maps. If you have any questions or are interested in mapping your own organizationâ€™s challenges, feel free to reach out on Twitter at @Cory_foy or via email at hello at coryfoy dot com. And be sure to check back next Monday for a new – and happier – Mapping Monday! Have a great week!