On Community and Conferences

Technology Community – let’s chat for a second. Over the past…well, since you were created, you’ve been a male-dominated field. Unlike some other fields, you are well known for your cutesy “lack of social interaction”. Of course, now you are getting popular – it’s cool to be a “brogrammer” and code and hang out at bars, making lots of money and sneering at the people who have held you down in the past. Also, I realize that even though you’ve been around for many years, you maintain a youthful edge to your appearance.

(Yes, that’s me and a transformer)

Your brain is quite smart – looking at each individual neuron as a programmer, you have a lot of talent and good things to say. Unfortunately, the part of your brain that doesn’t filter what you say gets vocal from time to time and says things that are highly inappropriate. Like saying a key benefit of your event is “women”. Or digging yourself into a hole arguing on the internet instead of being responsible and taking the initiative to take things offline yourself (Hint: if someone is giving you negative advice that you think is inappropriate or you don’t like, either take it to email, or ignore it. It’s never worth it to engage publicly). Or giving talks filled with lingerie or negative connotations about people’s religious affiliations, race, sex, creed, family choices, etc. 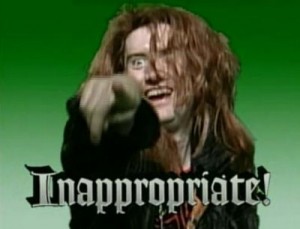 And, to some degree, I can forgive you. The newer neurons haven’t had a chance to be through the same experiences. To know what it’s like to have the one community where you think you can feel safe among your kind actually be no different than the other vile, inappropriate communities you’ve been a part of. To have fellow geeks make jokes like, “Hey Barbara, I heard you have DSL!” and then hear your other peers laugh because they weren’t referring to Digital Subscriber Lines.

But you older neurons – you are supposed to be the leaders. And as such, it is your responsibility to be the wise old geeks. The kind to go up to those younger neurons and help them see that such talk has no place in a community such as ours. There’s no need for conference blacklists, or anything like that. Because old, wise geeks talk. And network. And communicate how well topics were accepted or not. And discover which neurons actually care about building a community versus getting a laugh using tired old content because their talk doesn’t have enough real content to actually stand on its own.

You older neurons also have to stand behind those trying to make a difference. How long do we want to be known as the community where you shut off the lights, slide pizza under the door, and keep our Steam wallets full and hope for the best?

Metaphors aside, I have two daughters. One of my daughters said about a year ago, “When I grow up, I want to be myself so I can catch lizards and fix things”. I never want her to go to an event, or hear a talk, or read an article and ever think otherwise – especially from someone in my community. Software developers who aren’t white, male and nerdy from the get go have to struggle enough as it is without listening to those younger neurons try to be funny and the people in the audiences being totally OK with it.

And, as Pete says above, true craftsmen focus on the ability to take a complete job from start to finish. In addition, they focus on building the community – a community of professionals. That means it’s not enough to just “be offended” at these types of things – we have to take an active role in setting a standard that we won’t accept it as a community, and reaching out to bridge the gaps that we as a community have allowed to foster for a long time.

There’s something very wrong when I, as a dad, am more worried about my daughters being exposed to the software community at large rather than the little boys that will inevitably end up at my door step. Or when I have to worry that if I teach my nieces programming that they’ll then be ostracized by the very community I want them to be excited about. We need to come together and simply say, no more. We won’t stand for that, we won’t tolerate it, and we’re going to actively work to bring diversity into our community and help people see more role models than the white, nerdy and male ones we have right now.