This afternoon at Agile 2010 I ran a session called Technically Distributed: Tips and Techniques for Distributed Teams (slides are at the end of this post). While I gave information about some of the tools I’ve used for teams, I think the key revelations came from two exercises we did.

In the first, the teams had to create a picture. Their “product owner” had the picture, but wasn’t allowed to show it to the teams. This was to simulate that most product owners have a great vision in their head of what they want – the tricky part is communicating that to the team. We ran the session with a 5 minute backlog planning session, followed by two iterations of 2 minutes of planning followed by 10 minutes of working. Half of the team had a collocated product owner, while the others had to send a “Business Analyst” to the front of the room to ask the PO questions when they had them. At the second sprint I swapped so the collocated teams were now distributed, and vice versa.

What was interesting were the insights the teams uncovered. The biggest frustrations from the teams were having to wait for the BA to get more information, and several tried just sending everyone up. On the Product Owner side, the biggest frustration was how to communicate the vision – there was lots of spatial information to communicate, and strange objects. But by the end everyone had finished (and come pretty close to!) the picture. We identified three key areas that attributed to them being able to do that: 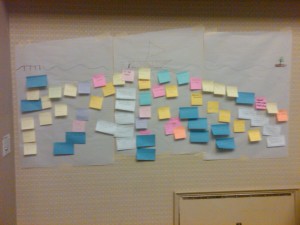 After the exercise was complete, we played a round of Speed Boat. I asked people to write down the anchors that held them back as distributed teams. As you can see from the picture, we had quite a few anchors. We didn’t have a chance to group them during the session, but I took them back to my room and found out that the spread across categories wasn’t quite what I was expecting. We had five main categories – Trust and Team, Communication, Time Zone, Org Issues and Tech Issues. Maybe it shouldn’t have been so surprising that very few of the issues were technical in nature – reinforcing that tools are not going to solve the distributed team problem. It ended up like this: 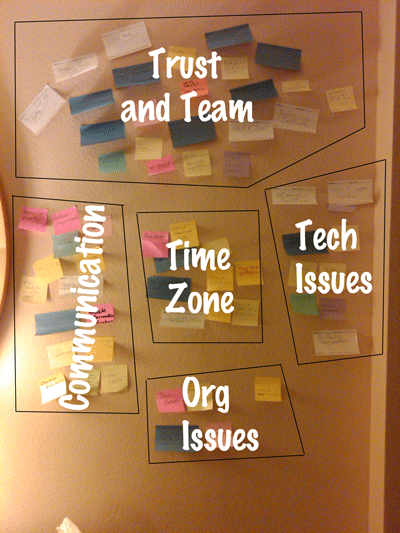 Another interesting aspect was that there weren’t a lot of duplicates. Here are the cards, with duplicates removed:

I had a great time, and most of the feedback seemed to echo that the participants did as well. I promised that I would list out the tools I mentioned or use, so here they are:

Thanks to everyone who came out! And if you have any other tools or tricks, please feel free to leave them in the comments below.