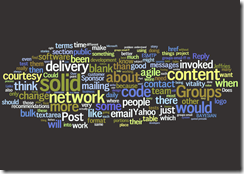 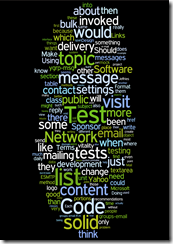 I took the 2000 highest used words, filtered out some common ones (“the”) and popped it into the Wordle advanced interface which, surprisingly, handled it just fine. I had all of the messages locally in mbox format (because I use Thunderbird) which is essentially a flat file. So the Ruby script was basically file.each_line {|line| line.split.each {|word| insert into database} } which I then pulled back out sorted by word_count.

Be sure to click on any of the images to see a larger image. Enjoy!