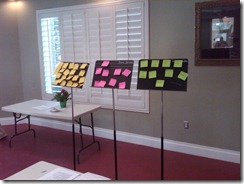 One of the more interesting things about facilitation is that you have to be prepared for just about anything. Retrospectives and exploratory sessions can generate very strong emotional responses – from yelling, to crying, to utter silence. However, most retrospectives are about improvement – part of the kaizen philosophy. At the end of the day, the group expresses their emotions, we find things within their scope of power they can act on to change, and the group gets a little better. However, the outcome isn’t always about improvement – sometimes it can be about dissolution.

A couple of months ago I was asked to facilitate a discussion for a local church’s council members. After nearly 12 years of work, they had come to the point where it was time to close their doors from an emotional, personal and financial perspective. As you can imagine, a church has a strong emotional bond for its members – especially those who spent many years of their life building it up. Over the course of several hours we were able to move the council through an objective look at their current state while honoring the necessary subjective and emotional content they felt the need to express. By the end, with the group literally in tears, they had all agreed on a course of action.

When dealing with these kinds of emotional situations as a facilitator, there are some steps you can do to help make things go smoother:

Dealing with any kind of reflective activity can generate strong emotional responses. It’s up to you as the facilitator to not only guide the group – but to stay out of the emotional whirlwind. By doing that, you can help the group discover the decisions they need to make and allow them the room they need to work through those decisions.

Next post: If You Want Feedback, You Need to Tell Your Customers

Previous post: Speaking at MIX10! – IronRuby for the .NET Developer