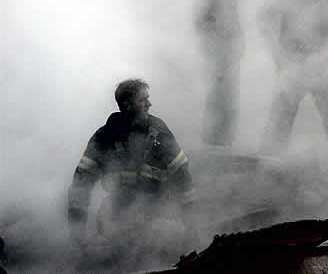 Most of us don’t give much thought into what happens if our house catches fire. We call 911, the firefighters come in their shiny red (or green, or yellow) trucks, pull some hoses, spray some water, and then we call our insurance agent and begin rebuilding.

But there is a lot of training and preparation that goes into those firefighters being able to put out that fire, and then be able to hop in the truck and go back to the station, unharmed. In addition to the training, there are a myriad of safety systems to protect them – Gloves, Boots, Turnout pants, Turnout coats, nomex hoods to protect their necks, helmets to protect their heads, PASS devices if they get hurt. But there is one system that highlights an interesting look into reward systems and what it takes to change organizational culture.

SCBAs (Self-Contained Breathing Apparatus). These are the air packs and mask systems that protect the firefighters eyes, nose and lungs from the toxic effects of the smoke and the superheated air. And you would think that when SCBA’s were introduced, that it would have been taken up by any fire department that could get their hands on one.

And you’d be wrong.

I joined the fire department in 1996. Not the 40’s or 50’s when there may not have been SCBA’s. In fact, SCBAs had been around for many, many years. Yet, there was an active effort to educate firefighters that they should always wear them, and that before they went into any fire, they needed to be “on air” – mask on, plugged into the system, breathing from the tank air. Now think about that. There was an education campaign going on to tell people that it would be a really good idea for them to use this safety system which prevented them from breathing in 600 degree toxic smoke. Because the firefighters didn’t want to do it. Were they crazy? Did they have a death wish?

Of course not. What they did have was a reward system which gave credit for those who didn’t. It was considered a rite of passage to go into a fire without a mask. They even had a term – Smoke Eater. And while the fire chiefs might have wanted the change to happen, they had a culture to overcome. A culture which rewarded those people who already chose to do something a high majority of the population didn’t want to do by elevating those who took even greater risks and pain of not having a mask. It was just part of the job.

As coaches and consultants, and as those wanting to being change to our organization, we know that it typically takes pain to force a culture change. When a team is in enough pain, they’ll try just about anything to get it to stop.

Except when that pain is an accepted part of the culture.

Let’s take, for example, overtime in gaming shops. Or lack of automated testing in any sizable project. Sure, our families are upset, or every time we make a change something else breaks. But that’s just part of building software, of solving the cool problems, of getting it out the door. Right?

This is why it is so vital to measure the work streams, and to inspect what is going on with fresh eyes. Somebody should be saying, “Hey, this ‘breaks every time I check in’ thing causes me a lot of frustration, and it doesn’t seem like that should be the norm”. Sometimes the team can have that kind of introspection. Always the executives and management should be probing for these kinds of issues. And if you have a coach or a ScrumMaster on your team, then they should also be watching for these things.

Pain and frustration should never be considered “Just how it is”. And if you reward those who continue to push through it, and live with it, you’ll get what you pay for. But if you reward those who seek out to identify and remove that pain, you’ll end up with an organization capable of working through some pretty serious dysfunction.