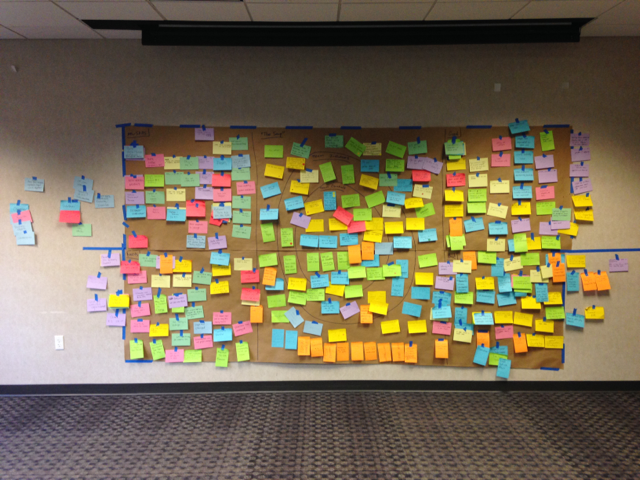 A couple of weeks ago, I wrote about a large scale retrospective I facilitated to get some rapid insights from a large team in just one hour. This week we were able to bring in a fuller set of the team, but were still under time constraints – just 3 hours. We needed to solve several issues at once:

1) Large scale. We were expecting up to 120 participants

2) Scalable – We knew 120 people wouldn’t be able to stay in one room, so we needed a way to split them into at least 4 subgroups before splitting into smaller groups

3) Rapid – we only had 3 hours, which needed to also include a review of the previous retrospective, as well as time from leadership to be able to ask questions about the insights generated from the game

4) Specific – the last retrospective generated only one item in the “What we did well” category – “Deflecting Issues”. We wanted to explicitly give them time to think about good things that have happened

5) Long-term – we were covering a 6-month period

6) Rapid Filtering – we needed the teams to be able to quickly self-identify issues under their control, and issues which were beyond their control so they could vote on things which could actually be changed

I ended up choosing a combination of 6 Thinking Hats as well as a modified version of Spheres of Influence called Circles and Soup which I found on Diana Larsen’s blog. We ran it the following way:

Purple Hat – Things You’ve Learned: Our goal here was to get people thinking about what new skills they’ve learned while a part of the program. Some people have been on the program for two years, and while there have been lots of challenges, they also have learned a lot of new ways of working. This isn’t actually in 6 Thinking Hats, but was critical to add.

White Hat – Facts: There are lots of conjectures and guesses about things, but we wanted to focus on facts. Some were great (), while some were concerning (“There are 7 Work Days in week”).

Yellow Hat – Good things: What we thought was going to be the hardest part of the retrospective was really insightful. They were only allowed to write good things that had happened over the past 6 months. The teams didn’t use the full 10 minutes, but still generated some great insights 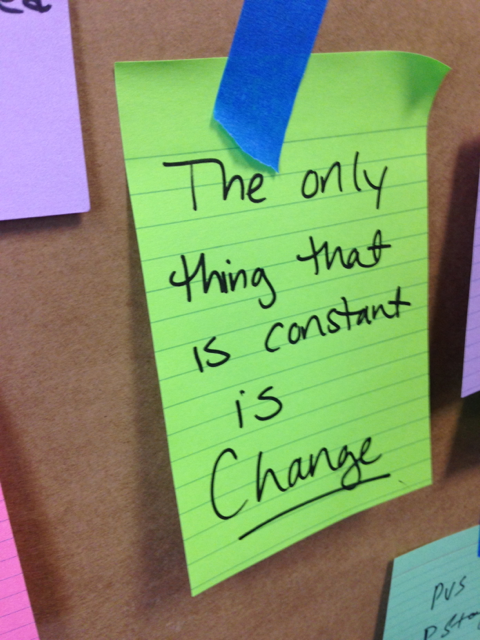 Black Hat – Bad things: As we expected, the teams did use up the full 10 minutes on this, and then some. But the insights here were things that we could take action on as a leadership team, which is always a great thing. When people say, “I hate this” you can’t do a lot. But when they give specific things, you can fix or mitigate those, which is a great feeling.

As I mentioned above, we wanted to be able to let the teams vote and prioritize the things they thought were the biggest items. But we also wanted to filter things the team could actually control. My concern was that I didn’t want that to be a management action – the filtering needed to come from the teams. But given that we only had about 90 minutes to collect and analyze data, how could we do that? 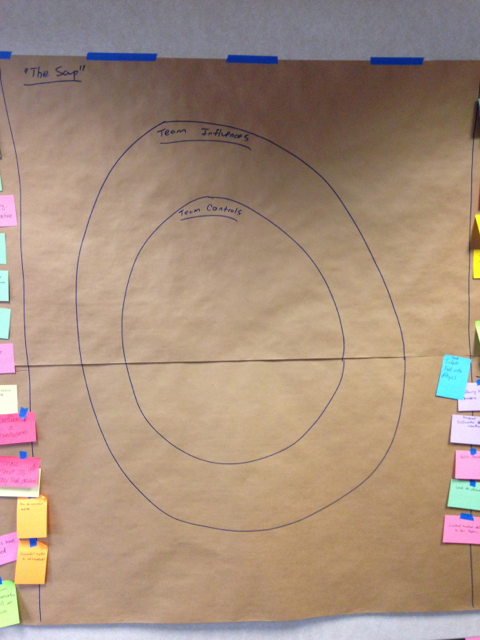 I came up with the following visual chart. The four quadrants around the center were, clockwise from top left, New Skills, Facts, Bad and Good. In the center of the chart, I drew the Circles from Circles and Soup, with the inner circle representing the things the teams could directly control, the middle as the things the team could influence, and the outer circle being “the soup” that the team could only respond to when they found themselves in it.

With the first four hats, I had the teams consolidate the answers into the appropriate quadrant. Behind the scenes two of our coaches worked to consolidate duplicates – something the teams should have done with more time, but we were surprisingly low on space with the amount of items they were generating.

Once we got to the ideas for improvement, I introduced the circles. I told them to think about the circles as they wrote their ideas, and then post them to the appropriate circle. We did the same with the emotive statements – they put them into a circle which was closest to what they felt the statement fit into, or the control they felt over it.

I found this to be extremely powerful – it created a natural filter for showing the teams what they could control and handle. In addition, it appeared to focus their thinking into items they could do, and things they needed help with.

Once we had the Thinking Hats exercise finished, I had the teams dot vote the items they felt were most important. Each participant got two dots with a marker. In addition, if they thought something was really critical, they could grab a dot sticker and put it on the card to highlight it. 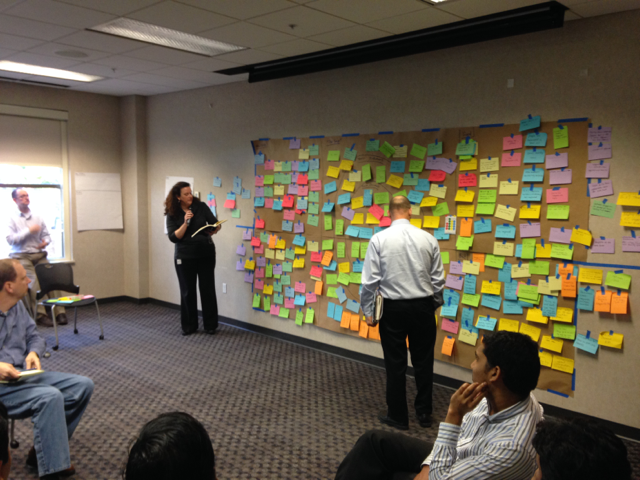 As all of this was happening, the key directors from the program were reviewing the board and watching what was coming up. So after the dot vote, I was able to turn the floor over to them to be able to talk directly about some of the things they saw, including questions and some answers. I stressed it important not to promise any actions directly during the Q&A until we had a chance to analyze the data.

In the end, we ended up with over 350 cards of information, and some really great insights into what could be improved across the program and organization. The leadership has already begun taking action on certain items from the retrospective, which is building more trust in the teams that, when it’s within their control, action will be taken. In addition, we achieved the goal of getting the right information from the teams by helping them naturally filter the things under their control so we could not only respond faster, but also help them to see that something we just have to figure out how to respond to when it happens.

Thanks Diana for the great exercise idea, and to Jared Richardson, Paul Mahoney and the other coaches who helped co-facilitate, collect information, and bounce ideas off of.

1 thought on “Retrospective – Hats and Soup”