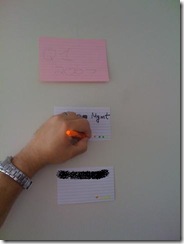 Yesterday I ran a largish retrospective for about 60 Program Managers, Product Owners, ScrumMasters and Team Leads. Since a couple of people had asked me on Twitter about how I ran it, I wanted to go through a mini-retrospective of it.

In this program, there are about 25 teams working together on a large-scale project. They are following aspects of the SAFe Framework, and yesterday was their PSI planning. Because of some pressures of the program, the teams had already moved the normal Inspect and Adapt session to nearly the end of the next PSI, but I wanted to still run a retrospective. So the challenge was – effectively running a retrospective to collect data and generate insights in one hour.

I tend to follow the pattern from the excellent Agile Retrospectives: Making Good Teams Great book. The steps are: Set the Stage, Gather Data, Generate Insights, Decide What to Do, and Close the Retrospective. (I’ve blogged about it before)

The program had been through a lot of turmoil, and many people have not seen results out of the retrospectives they’ve done previously. So I gave a brief overview of the mindset of a retrospective – namely, focus on things we have control over and can potentially change. That ultimately we own the process that we follow, and it should work for us.

With a group this size, any form of open data gathering would have been ineffective. In addition, there is a mix of personalities, ranging from extremely vocal to not speaking at all – even if there was a fire. I chose an activity called “Triple Nickels” – split everyone into groups of 5. Each person in the group gets a piece of paper, and has 5 minutes to write down 5 things – complaints, kudos, improvements, etc. They then pass it to the person on their right, who has 5 minutes to build off of whatever is in front of them. All told this took about 25 minutes, and we generated well over 200 pieces of information.

With being over halfway through with the retrospective at this point, I knew we needed a high impact, rapid way of generating insights. So I put 5 categories on the wall – Things We Did Well, Things We Did Less Well, Things We Need To Change, Things That Are New Ideas, and Kudos. I asked each group to generate up to three cards to place into each category, and that they didn’t have to put a card in a category at all. This took about 15 minutes.

Deciding What To Do

Because this was a program-level retrospective, and we only had one hour, I worked with the leadership team to agree that we would take action – not just a plan, but actually take action – on the top items by the end of the following week. I communicated this to the teams participating, and stressed that it was my reputation on the line to make sure that happened.

To close the retrospective, I ran a session of ROTI – basically, a chart on the wall with the numbers 0 through 4, with 0 being it wasn’t worth the time invested, and 4 being more value was gotten than the time invested. There were no 0s or 4s, but most hovered in the 2 and 3 categories.

Even though we only had 60 minutes to run the retrospective – and I don’t normally like doing that – the combination of exercises seemed to really work well at getting data. The teams stayed very engaged to their credit, and I had the help of two great coaches – Paul Mahoney and Jared Richardson – to help guide them as well.

The biggest feedback I got was around the Triple Nickels exercise, that it worked well for helping to get information from people that otherwise wouldn’t have spoken up. So I consider that a good win.

Our next steps are a larger Inspect and Adapt workshop with all of the team members – all told probably over 200 people – which will be held in March. I have ideas already for that as well, and will update once that happens!