This past week Iâ€™ve been attending the Agile 2010 conference here in Orlando, FL. For those who donâ€™t know, the Agile 20xx series of conferences came because of the combination of two separate conferences in 2005 â€“ XPUniverse and Agile Development Conference. Since that time, the conference has grown quite a bit â€“ this year we had 1400 attendees, over 1000 submissions, and around 200 sessions. Butâ€¦something felt like it was missing:

#agile2010 Programmers started the agile movement to get closer to customers not project mangers. – @unclebobmartin

@unclebobmartin …the conference was stolen a very long time ago. you were busy keynoting, i guess. #agile2010 – @GeePawHill

But it wasnâ€™t just the conference attendees. I was the stage producer for the Team-Room Agile stage, and my co-producer Corey Haines and I talked a bit about the amount of technical / development content in the program. Mike on the blog A Software Craft said it very well with this blog post:

What do I see dominating the Agile2010 program? Lots of good sessions on learning, communicating, coaching, creativity, adoption strategies. Sessions that I would probably come out of saying "interesting" and "thought-provoking". But ultimately, sessions that were easy to digest. Not sessions where I encountered concepts that are fundamentally difficult and require hard work to master. Not sessions where I struggled to write good tests and emerged with a determination to rework and discuss the examples over the coming weeks until I finally felt I understood it.

Perhaps I’m a minority. @HackerChick tweeted about a tutorial on TDD where only a quarter of the attendees showed up with laptops, prepared to get their hands dirty. Perhaps Agile2010 isn’t the conference for me. A conference where the technical track is only 1/15 of the program. And the technical track includes sessions on "The Butterfly Effect" and how to "Walk and Code". But I worry about another crop of agile converts, filled with all the soft skills and strategies they need to succeed, headed for failure because they don’t know about the hard work and dedication needed to build that essential ingredient: the agile developer.

That second paragraph says it all. The Monday tutorial heâ€™s mentioning was Brad Wilsonâ€™s  session called Evolutionary development for the web with ASP.NET MVC and TDD. Even though it was said it was hands on, and that it would be using Visual Studio, only around 25% of the attendees brought a laptop. And in Uncle Bob Martinâ€™s Clojure session, I was surprised at how few people had their laptops. 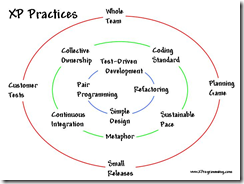 So when Corey said to me, â€œTwo Words: XPUniverse 2011â€, I thought it was funny. And then I realized it was right. We have a niche inbetween the Agile 20xx series of conferences at the Software Craftsmanship conferences such as SCNA. A conference focused back on the delivery of software â€“ the XP Practices and Principles. What are they? Hereâ€™s the practices from Ron Jeffriesâ€™ site. Whole Team. Customer Tests. Planning Game. Small Releases. Collective Ownership. Coding Standards. Continuous Integration. Metaphor. Sustainable Pace. Refactoring. Simple Design. Pair Programming. Refactoring. Test-Driven Development. The hands-on practices that enable us to deliver software which provides incremental value in an iterative fashion. And a hands-on conference where you are expected to have your laptop, where you will be taking back practical exercises and practices to your development team. A conference focused on the developers, testers and the customers they love and who love them. A conference focusing on the fundamental principles of XP: Rapid Feedback, Assume Simplicity, Incremental Change, Embracing Change, Quality Work. And a conference small enough (~300 people) to be able to connect, explore and learn.

For now, please be sure to follow @XPUniverse2011 for the latest information. Weâ€™ll be adding a website and more information as it becomes available. And if you need any specific information or have questions, please feel free to leave a comment below, or email me at foyc at cory foy dot com. Otherwise, we hope to see you soon!